Gregory L. Fenves always liked to loosen his tie and shed the formalities whenever he came east of San Jacinto Boulevard.

Fenves admitted up front in June 2015 that “athletics is the one area of the university that I’m not as familiar with.” But he became one of the most athletic-savvy presidents in modern University of Texas history.

Fenves announced Tuesday he will be leaving UT this summer for a similar job at Emory University, a private Division III school in Atlanta. Division III schools do not offer athletic scholarships, but they also don’t have Power Five-level headaches, either.

“Earlier this year, before the (coronavirus) crisis, I decided it was the right time to conclude my tenure at UT,” Fenves wrote in a campus-wide email.

Fenves was not taking interview requests on Tuesday, according to a UT spokesman. He did not respond to messages left by the Statesman.

Through three athletic directors, two football coaches and securing funding for major facility expansion, Fenves proved a quick study. He took over during a tumultuous time in UT history but realized one truism: Athletics will always be the university’s front porch.

For someone who didn’t know much about athletics, he went to the wall for the Longhorns — and tapped the kegs, too. At his introductory press conference, Fenves signaled he was open to selling beer and wine at UT sporting events. Asked for his preference, “Lone Star!” he said.

All sorts of key athletic decisions started flowing from the Tower.

Within three months on the job, Fenves realized Steve Patterson wasn’t working out as the athletic director and fired him just after the 2015 football season started. He asked Texas ex Mike Perrin to step in and soothe frayed nerves, a job Perrin did with aplomb.

When former football coach Charlie Strong needed a new play-caller, Fenves got on a private jet with him, flew to Tulsa and helped secure Sterlin Gilbert. Typically, university presidents would laugh at the mere suggestion of hiring such a lower-level employee; it’s beneath them. But Strong got his man for the 2016 season.

“I mean, I’ll tell you, he is knocking it out of the park on just about every tough issue,” then-UT Chancellor Bill McRaven told the Statesman in 2016. “So as I think we go forward, we’re going to find he may be one of the very best we have in terms of understanding the nuances of athletics.”

One year later, Fenves was proud to tell the Statesman, “Well, I’m up to speed.”

University presidents, including those at UT, always hire and fire the football coach. Strong was 16-21 in three seasons, and the loss to Kansas in November 2016 made Fenves’ decision easy.

After the season ended, Fenves and Perrin spent all night at the Hampton Inn in Bastrop interviewing then-Houston coach Tom Herman, considered the hottest coach on the market at the time. It was all handled under the cover of darkness. Herman was hired practically within hours.

At Texas, if you get football right, everything else takes care of itself. Herman is 25-15 in three seasons, 3-0 in bowl games and the Horns have already played for one Big 12 championship.

“I think coach Herman has shown that he’s built a platform and strong program that’s a base for future progress,” Fenves told the Statesman in May 2019. He gave Herman a two-year contract extension, pushing the coach’s deal through 2023.

Fenves’ critics would argue his only serious misstep in athletics was giving men’s basketball coach Shaka Smart an extension after the 2015-16 season, his first in Austin. “We just want to show him that he’s really important to the University of Texas,” Fenves said in August 2016.

Smart has yet to win a NCAA Tournament game in four previous seasons; this season’s tournament was canceled. He’s still owed $10.5 million on the remaining three years of a guaranteed deal.

Still, Fenves has received universal praise for hiring TCU athletic director Chris Del Conte in 2017. Del Conte has proven to be a masterful fundraiser who has energized the entire UT fan base.

Del Conte has secured enough donor commitments to pay for $125 million of the $175-million expansion of Royal-Memorial Stadium’s south end zone. Most of those commitments are pledges, though. It’s still unclear how fundraising will be affected by the conoravirus stoppage.

Fenves’ master stroke may ultimately be the creative fundraising for UT’s new basketball arena, the Moody Center. Instead of raising $338 million in donations, he struck a deal with the California-based Oak View Group to build and manage the facility.

Texas and OVG officially reached a 35-year deal where UT still owns the land underneath the building. The school will take full ownership when the deal expires.

“Today, boss, this is about you,” Del Conte told Fenves on the stage during the Moody Center groundbreaking ceremony last December. “You had an unbelievable dream for the University of Texas. You had a vision.”

Del Conte jokingly calls Fenves “el jefe” — Spanish for “the boss.” The two have a strong working relationship, and Fenves rewarded the AD with an $18-million contract extension that stretches through 2027. “I want to make sure he stays here for a long time,” Fenves said in November.

Whoever takes over in the Tower, that person will see the benefits of Fenves’ decisions. The football stadium expansion is scheduled for the 2021 season. The basketball arena is scheduled to open for the 2022-23 season. 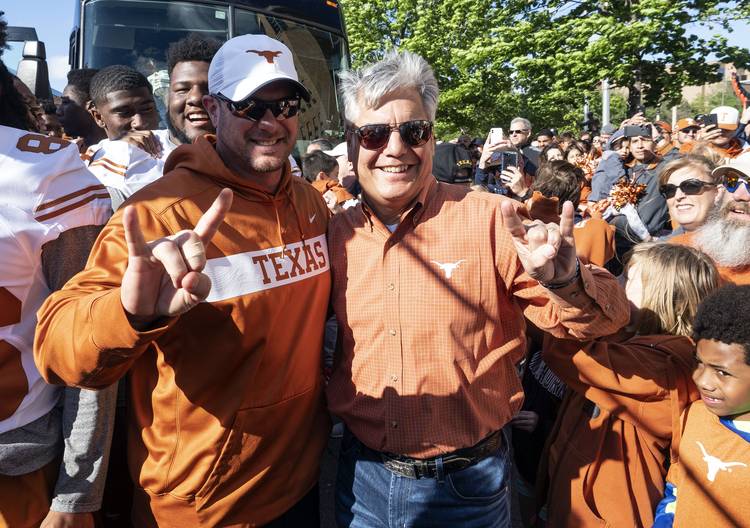