Texas Tech’s Jones AT&T Stadium is usually filled to capacity when it comes to the Texas Longhorns coming to town, but Saturday will be different.

Instead of 60,000-plus lobbing insults and frozen tortillas at the visitors, Tech’s stadium will be at 25% capacity for games this season, including Saturday’s matchup with the No. 8 Longhorns.

“I guess there will be a quarter amount of tortillas thrown,” Texas quarterback Sam Ehlinger said Tuesday. “It’s kind of unfortunate. It’s always a great time playing up in Lubbock. They’re always a hostile environment and I expect it to be the same, but I guess at just 25%.”

Maybe the tortillas will be flying “at 100% of 25% capacity,” Tech coach Matt Wells told us during this week’s “On Second Thought” podcast.

Corn or flour doesn’t really matter in the large scheme of things because the most important numbers point to the Longhorns faring pretty well on the High Plains in recent years. Truth be told, Tech has only beaten Texas twice in the last nine games played on the High Plains, but those wins were absolute classics.

There’s just something about playing Texas at home that every so often brings out the best in the Red Raiders.

Take 2002, for instance. In that epic shootout, there were far more than tortillas flying at the visiting team, particularly the secondary. Long before he became a head coach at his alma mater and later, the Arizona Cardinals, Kliff Kinsgbury cemented his status as a Tech legend when he threw for 473 yards and six touchdowns as Mike Leach’s Red Raiders knocked third-ranked Texas — a team with eight future first-round NFL draft picks — from national title contention with a 42-38 win.

As the Texas media contingent gathered outside that closet that doubled as the visitors’ interview area, a weary Texas offensive lineman by the name of Derrick Dockery walked past me, beat writer Suzanne Halliburton and others up the long tunnel, toward the locker room.

The stands had emptied onto the field and a celebration was well underway with Kingsbury on the field flashing the “Horns Down” sign to the delight of the home folks. For Texas, the reality of a second conference loss was starting to settle in. So it goes without saying that the man nicknamed “D. Dock” was in no mood to chat.

Then a fan’s voice rang out.

“Hey Dockery, get your fat butt up that tunnel! We kicked your butt, Dockery! You suck!”

The No. 76 on Dockery’s white jersey shined in the dimly lit tunnel as he turned around  — all 6-6, 345 pounds of him —  and made eye contact with his smiling tormentor.

“Uh oh,” Suz muttered under her breath as Dockery began what could only be described as an extremely purposeful walk back down the tunnel toward a confrontation that he was sure to win.

The fan took a quick inventory of what was about to go down and softened his words.

“Hey homeboy, I’m not trying to fight you,” he said. “I hoop. I’m a basketball player. I don’t play football.”

Turns out it was Texas Tech basketball star Andre Emmett, who, as many of you know, was tragically shot and killed last December in a robbery attempt in his hometown of Dallas.

That’s only one of several stories surrounding a  Lubbock history that’s heated despite its one-sided nature.

Ask most Texas fans to name Mack Brown’s second best team (behind he 2005 national champions)  and it will inevitably come down to 2008 versus 2009.

That ’08 bunch, with Colt McCoy, Jordan Shipley and Quan Cosby on offense and Earl Thomas, Brian Orakpo and Sam Acho on defense, gets the nod for my money.

Texas had already beaten top-ranked Oklahoma 45-35, No. 11 Missouri and No. 7 Oklahoma State and  was on a collision course with the Tim Tebow-led Miami Hurricanes for a national championship showdown.

That is until Graham Harrell hooked up with wideout Michael Crabtree on a 28-yard touchdown pass with one second left, right after Texas freshman safety Blake Gideon dropped what would have been a game-sealing interception. By regular season’s end, Texas was the odd man out due to a horrible three-team tiebreaker rule after Tech was blown out 65-21 in Norman.

As for Saturday, the atmosphere won’t be what we’ve become accustomed to seeing in Lubbock. The Red Raiders have lost five straight to the Horns since Harrell and Crabtree hooked up and the opening week’s near upset at the hands of Houston Baptist coupled with Texas’ 59-3 win over UTEP prompted the oddsmakers to install the Horns as an 18-point road favorite in a beehive that will be missing 75% of its bees.

“When it’s full and it’s loud, Red Raider Nation, they’re loud and they’re proud,” Wells said. “They’re passionate about Texas Tech and you feel it. The home team feels it and I know the visiting team and the coaches feel that against them. It’s a big home-field advantage for us when it’s full.

“Twenty five percent? It will be pretty loud, though.”

Texas should win by double digits because it’s the better team, but coach Tom Herman said it would be foolish to assume anything judging by the results of how the teams performed in their openers. 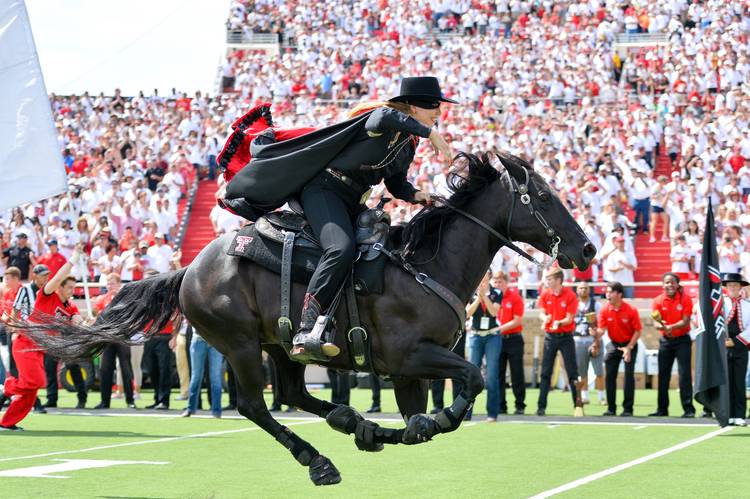