For 17 Texas seniors, Friday will bring about a moment of introspection. It’ll be the last time they run onto the field at Royal-Memorial Stadium.

“I walk around the locker room and I’m like, I remember when I was a freshman looking at seniors and thinking that they looked really old,” quarterback Sam Ehlinger said this week. “I just don’t feel that way.”

Putting all feelings aside, there’s just no delicate way to say this. The 2020 senior class hasn’t really done much, at least when judged by Texas’ historical standards. There was one sensational night against Georgia in New Orleans, but otherwise, it’s a group that’s gone 1-4 against Oklahoma. These seniors have so far played for only one Big 12 championship.

Friday is a day Ehlinger and his senior classmates should relish, because they can start writing a new narrative. No. 20 Texas faces No. 15 Iowa State in something akin to a Big 12 championship knockout game. The winner picks up a key tiebreaker advantage in the league standings while life becomes more complicated for the less fortunate.

The Longhorns (5-2, 4-2 Big 12) are slight favorites over the Cyclones (6-2, 6-1). But it’s basically a tossup. Beat Iowa State, and UT will be clear favorites in the final two games against Kansas State and Kansas to reach Arlington.

“Our players know that we control our own destiny,” Texas coach Tom Herman said Monday. “But in order to do that, we’ve got to go 1-0 each week. We also are very, very aware of the talent level and level of play of our opponent here in just five days.”

The Horns have not played in 20 days. They had a scheduled bye week, and then a game against Kansas was postponed because of COVID-19. The Cyclones crushed the Wildcats 45-0 last week, so they’ve got real momentum.

This should be a physical affair, especially with Iowa State’s penchant to use heavy blocking schemes with the tight ends. Defensive tackle Ta’Quon Graham said it’s quite a change-up to go from the typical Big 12 spread offenses to tight-end heavy run personnel.

“They have big strong tight ends that love to block,” Graham said. “And they also are pretty talented when going to go catch the football. I think this is going to be a very physical game. And I think we’re going to have to be very disciplined with our run fits.”

There’s nothing flashy about these Cyclones, just plenty of substance. Running back Breece Hall is the nation’s leading rusher (1,169 yards). Quarterback Brock Purdy is 17-6 against Big 12 competition and owns or shares 23 school records. Iowa State has the league’s third-best defense and also ranks third in sacks per game (2.8).

In short, Texas needs its veterans to play like veterans.

Herman complimented Ehlinger for “stabilizing” the Texas program, which was in total free fall. Texas had gone through three straight losing seasons from 2014-16, triggering a coaching change. Ehlinger, a freshman in 2017, soon found himself under center at The Coliseum with USC defenders breathing down his neck.

The Horns won 10 games in 2018 as Ehlinger led the program to the Big 12 championship game. But the program went backward the following year and finished 8-5. This season, losses to TCU and Oklahoma triggered another wave of coaching speculation — even in a year beset by a pandemic.

“I think my mentality when I was at Westlake was I wanted to come in and leave the University of Texas football program better than it was when I got here,” Ehlinger said this week.

Asked to describe being the face of the program, Ehlinger said, “It’s an interesting life. I don’t know how to describe it to you, honestly. It’s a blessing, for sure, and there are a lot of beautiful things that come with it. And I wouldn’t want to have any other way.”

No four-year starter has left UT without winning at least one conference title. Ehlinger knows that possibility is still on the table for 2020. And that’s why he won’t let himself get all misty-eyed Friday when the seniors get recognized.

“I think it would be selfish of me to not be focused on the task at hand,” Ehlinger said.

This senior class can write a terrific final chapter. But it’s going to take all of them. Linemen Derek Kerstetter and Denzel Okafor must pave the way. Tight end Cade Brewer must get involved. Graham has to be a disrupter in the middle. Safety Chris Brown needs to canvass the secondary and flex when appropriate.

“They’re a good defensive line, man,” Kerstetter said. “It’ll be a fun test for us. We’ve got to go out and focus on being the best we can up front.”

Iowa State is chasing history. The Cyclones have not won a conference title since 1912. They’ve never been in a league title game, either. The closest the school has been recently was to share the 2004 Big 12 North title, but did not advance because of tiebreakers.

Texas will make a little bit of history Friday, too. The school will unveil a 12.5-foot tall statue of Julius Whittier to honor the first Black letterman in school history. The artwork was commissioned this summer as part of the series of requests made by UT athletes.

Whittier was an offensive lineman in 1970-71 and played tight end in 1972. He was not eligible to play as a freshman in 1969 per NCAA rules. Those three active seasons, he helped the Horns win three Southwest Conference titles and the 1970 national championship.

Winning championships is how you define the Texas standard. This current senior class has yet to do it. But time and opportunity are still on the seniors’ side.

“Over the last four years, we as a program, we’ve been through just about everything,” Ehlinger said. “I think it’s only fitting of everything that’s gone on, and I wouldn’t want it any other way.” 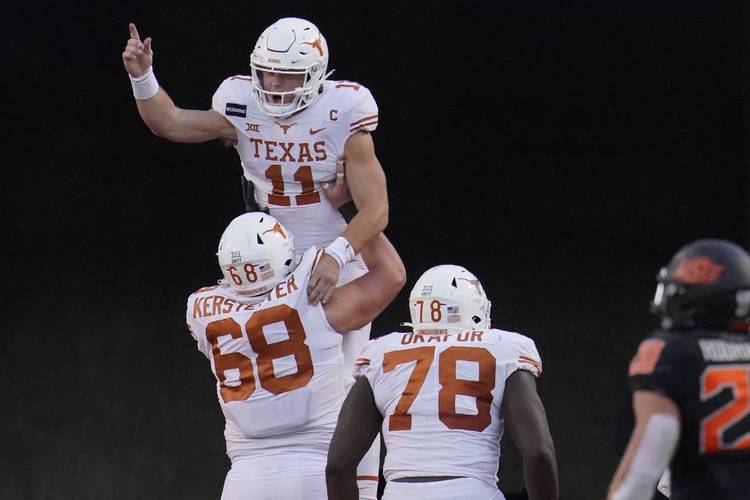