Ten days ago, Courtney Ramey’s unshakeable confidence, his unmistakable desire to win, was on full display after an embarrassing 29-point loss at Iowa State.

Was he worried about Texas’ season? Heck, no, Ramey said outside a quiet locker room at Hilton Coliseum in Ames. The Longhorns just needed to play with more “nuts.”

“No, I have the belief in myself,” Ramey said, “and I feel like I can will my teammates to bring out more.”

Since then, Texas has rattled off three straight wins, the latest one coming Monday night against No. 20 West Virginia. The Horns were down to only eight scholarship players but still managed a 67-57 victory at the Erwin Center.

This team still has more work to do, but the Horns (17-11, 7-8 Big 12) are playing their way back into the NCAA Tournament conversation. It’s the program’s first three-game winning streak in league play since 2016, coach Shaka Smart’s first season. It’s also three double-digit league wins for the first time in nine years.

“We haven’t really talked a lot to our guys about the negative things that other people have said about us, because we’ve said from the beginning that stuff doesn’t matter,” Smart said.

But the coach acknowledged the players are human. “I mean, they’re aware and they have pride,” Smart said. “So I think what you’ve seen the last few games is back against the wall, to some extent, and just fighting.”

Those who gave up should look again. These Horns are tied for fourth place in the Big 12 standings with the Mountaineers (19-9, 7-8). A 20-win season is now up for grabs.

“When you asked a couple of games ago, is the season over? I’d say we got a lot of games left,” Ramey said Monday. The next one, another huge one, comes Saturday at 22nd-ranked Texas Tech.

“We know we still have chances just to keep proving ourselves,” Ramey added. “That was our whole motto today: Make a statement. A lot of people aren’t talking about Texas basketball. So we just wanted to put our names on the map and prove people wrong.”

Ramey, who had a career-high 26 points last Saturday in a road win at Kansas State, had 21 against West Virginia. Andrew Jones lit the place up with a career-high 22 points on 7-of-13 shooting. Matt Coleman III had 13 points playing through a nagging heel injury.

Brock Cunningham had a career-high five boards, two in particular on the offensive end that saved a key possession. Ramey finished it with a baseline jumper and drew a foul, giving Texas a 61-52 lead with 2:18 remaining.

“Again, the sense of urgency, we’re at a point in our season where, if we lost any of these past three games our postseason dreams would’ve been shattered,” Cunningham said. “But now that we put ourselves in a good position moving forward, I think that brings new life.”

“We’re not as hungry for knowledge, we’re not in the gym as much, we’re not working at our craft the way that we did early on,” Huggins said.

Smart is eager for healthy bodies. He’s already playing without forwards Jericho Sims and Gerald Liddell, both out with back injuries, and guard Jase Febres (knee). Texas announced before the game that forward Kamaka Hepa had strep throat.

“We felt like we had a good group of eight,” Ramey said. “We’re all scholarship players at Texas, and we know we can all go. People just stepped up tonight.”

Jones was on fire early, hitting two 3-pointers as Texas jumped out to a 17-6 lead. West Virginia pulled to within six by halftime as fouls became an issue. But Jones and Ramey stuck with it, carrying the load with help from Coleman.

Kai Jones had six rebounds and a steal. Royce Hamm Jr. had three rebounds and a block. Together, those two committed nine fouls, but the Horns were happy to use them all.

Throughout the game, Smart was down on one knee slapping the court, soft at times and hard during others. He was amped sky-high when Cunningham drew a charge. Smart even got called for a rare technical foul — his third in five seasons — with 6:36 remaining.

Smart looked every bit like a coach fighting for his job and his team’s NCAA hopes.

“Oh, it was just good to see the emotion, you know?” Ramey said.

Said Smart: “I think our record in the games where I’ve gotten a technical is is pretty good.”

“I wouldn’t say nothing much has changed,” Andrew Jones said, “but our attention to detail, our aggressiveness and our passion for playing with each other and for each other has definitely grown since a lot of adversity has hit the team.” 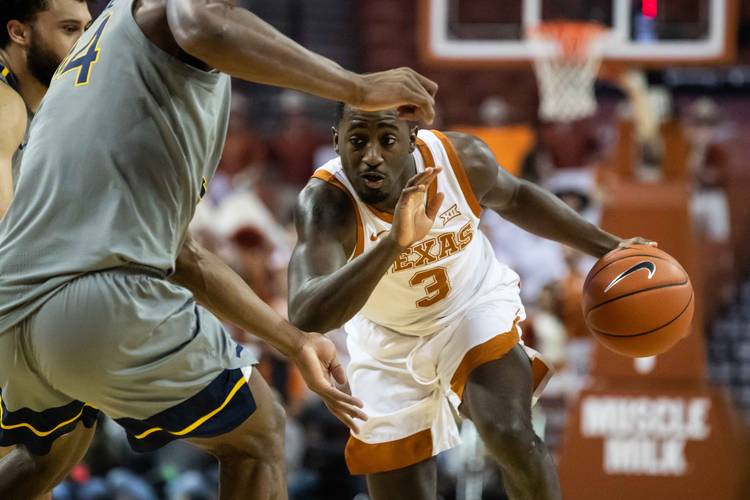